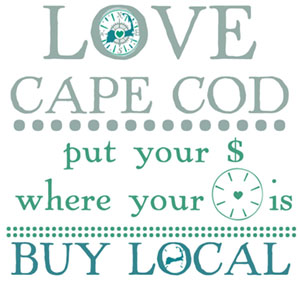 Over the past four years LoveLiveLocal has become a resource for Cape Codders who are wondering where they can purchase things locally. The past two years our own Amanda Converse has both explored her own shopping habits to share where there might be challenges with regard to spending the majority of her dollars locally, as well as answered others’ questions about where to shop local for their wants and needs. This year Amanda will mentor self-selected individuals who are trying to change some of their own shopping habits in order to ensure they invest in their community as much as possible.
***We interrupt this regularly scheduled email for a PSA from Amanda***

I have been part of what I’ll call the “shop local movement” for close to eleven years, as a small business owner and as an advocate. I immediately connected with the concept that spending dollars locally is better for the community, because it just made sense. In addition to the economic benefits that it brings – more money spent at locally owned businesses stays in the local community than at a chain store or online – I have always thought: Why wouldn’t you want to spend as much money as you can with the people who are your neighbors, friends, your son or daughter’s coach, your fellow Cape Cod community member?Someone said to me recently that they would bet that 90% of local businesses on Cape Cod would be gone in ten to twenty years. My first thought was “that’s crazy talk; there is no way that could happen.”

Regardless of whether it is an accurate estimate, it is hard not to think “what if?” You might be thinking about how many people are on Cape Cod right now, and how just by those sheer numbers, it makes that reality an impossibility.

I’d venture a guess that those people are likely going to the beach, eating out and probably getting an ice cream.  But are they shopping in local stores?

Anecdotally speaking, I have to be honest and say that Cape Cod owned retail stores are struggling. Most shop owners put their heart and souls and a significant amount of money into their stores and this community, but they are not seeing a return on this investment. Economically speaking, retail spending overall has been declining for months if not years as more and more people shop online on websites owned by large corporations.

So, going back to that question: “what if?” What if even just half of the small businesses on every Main Street on Cape Cod closed by 2030?

I know what of Cape Cod I want to live in. One where the Main Streets are vibrant and thriving and small local businesses are getting a return on their investment… and so is the community.

Our #lovelivelocal retail store has got you covere

⁣”There’s no sugarcoating it – this year h

⁣Prepping our retail space which opens back up t

The deadline for our annual #LoveLocalFieldGuide -